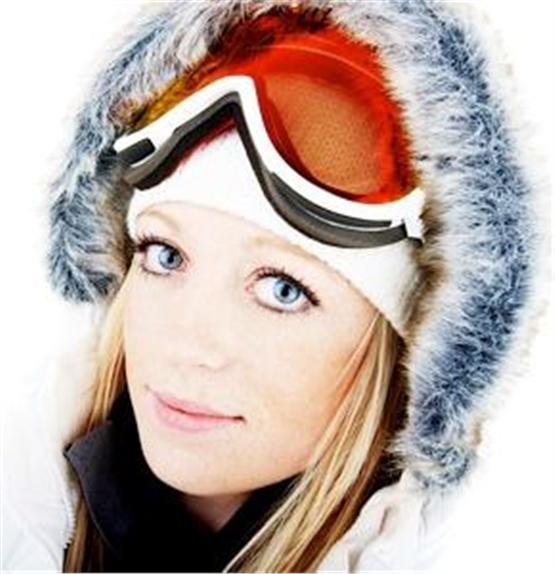 Durham’s Emily Sarsfeld, Britain’s top Ski Cross specialist, looks ahead to the coming season and receives a little beauty spa TLC on us.

Imagine you’re a racehorse, pacing the turf at the starting gate, poised to gallop at speeds of up to 80kph along a 1½ km course of death-defying jumps, some 45 metres high!

Ski Cross athletes face similar hazards every time they compete; and they have to do it on skis!

That’s what British No 1 Emily Sarsfield, does – and enjoys – and says the thrills of this adrenaline-fuelled sport more than compensate for the dangers.

Durham-born Emily comes from a ski-crazy family (holidays spent on mountains, not beaches!) and was part of the England Alpine ski team until she switched to Ski Cross in 2005. Winner of the Europa Cup in Val Thorens in 2010 (the first Brit to win any major cup), she is currently rated No 8 in the world.

She says: “I love the sheer variety of the sport. The start gate is just like a horse racing stall. As soon as the starter raises the board, you’re off!

“Each course is different: it might include a half pipe wall, bank turns, rollers, or a ‘camel jump’ where you take off on one ski then land on the other. You must pass inside the flags, so there is no chickening out. It’s all over in about 60 seconds, so it is very intensive. It is the most exciting sport in the world.”

At Emily’s standard it is also expensive. She needs about £30K annually to cover the cost of travel, coaching, hotels. A sports science graduate (from Loughborough University), she does sports-related jobs to earn the cash she needs.

Emily says: “In winter I live in Meribel, France, where I train. To pay for it, I run a sports massage service for holidaymakers.

But when she passes her international ski instructor final exam at the end of April, she will be able to teach in France, and start financing herself.

Emily believes that working hard to raise cash has made her more competitive: “My parents both have careers in education, so they can’t afford to throw money at me and I wouldn’t want them to.”

Instead, they have invested in a one-bed flat in the ski resort, which Emily rents from them. Her older sister Victoria, who was on the England Alpine Ski team with Emily, helps organise travel deals.

“Victoria’s boyfriend manages me, although I do the marketing stuff. I don’t have to get involved in any sports politics!”

Emily’s boyfriend, Dave Norkett, a chalet manager, also lives in Meribel in winter and both stay near London during the summer between trips up to Emily’s home town of Durham.

Her toughness and self-discipline helped her bounce back from a serious knee injury sustained during an Olympic test event in 2009. “I had two operations, and was out for eight months,” she says, “but this kind of thing is part and parcel of any sport. Now, I have an electric stimulating machine to exercise my muscles, tapes to support my leg and do exercises every day. It is fine.”

Her fitness schedule also includes hours of gym work, winter and summer and she uses special exercise bands to tone her muscles if she is in a hotel with no gym.  “Athletes who have to worry about catching a cold have my sympathy,” she says. “I can sneeze away and still compete well, but I train hard, never drink alcohol when competing and follow a sensible diet.”

In Ski Cross, it’s beneficial to carry some weight (Emily is 165cms tall, weighs 66kilos), but you must be agile. So diet should be moderate in calories, but bursting with nutrients:  “For me, what works is a low-fat diet,” she says, “so I cut the fat off my meat, eat muesli, nuts, fruit, natural yoghurt, vegetables and drink at least 3 litres of water a day. I love dark chocolate, though, so indulge sometimes – M & Ms are my favourite.”

Before competing she sips her home-made sports drink and eats a banana. “I have a banana case which actually looks a bit like a sex toy – people at the top of the course have made comments about it!”

Ski Cross competitions start with time trials; the fastest 32 skiers have to compete in a knock-out series in rounds of four, with four skiers starting simultaneously.

“The advantage of doing well in the time trials is that you can choose your position,” says Emily. “For instance, if the course favours the right, you can choose the right hand lane and get some speed. You are so close to the other competitors you could cross skis when you are coming down from a jump! You must follow the racing lines, and you mustn’t grab or put your arm out.”

She performed well, in both the 2012 world cup tour and the French championships, but it was a tough season, with this year’s competitions just weeks away. “It was full-on, ” she says. “The next three years will be just as hectic. But with my teddy bear, Dopey, my lucky charm bracelet, and my iPhone, I can go into any hotel and feel at home.”

“Now, I have to train hard and keep improving. I want to do well in the Olympics and encourage people to enjoy the sport as much as I do.”