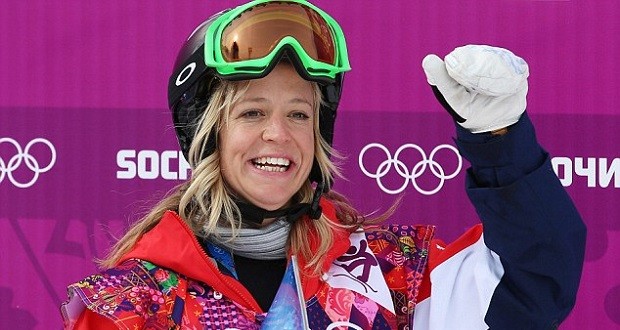 Snowboarder Jenny Jones has won Great Britain’s first Olympic medal on the snow with a dramatic slopestyle bronze in Sochi.

Jenny, 33, told BBC from the podium: “I did the best run I could have done. And I am so delighted for my mum and dad as they have done so much to help me get here.

Jenny scored 73.00 to place fifth after the first round, just 4.25 points off the podium places, and after an impressive second run she secured the bronze when the final competitor, Austrian medal prospect Anna Gasser, fell.
“It feels amazing,” added Jones. “I cannot believe it, I just can’t believe it. I knew I was going to drop [from first place] but I didn’t know how far. I am just so happy.
“It was so difficult waiting. I thought I did my best run and landed it as best as I could.”
Jenny, from Bristol, started her boarding career and did much of her training at Gloucester Ski Slope.

She becomes the first Briton to win a medal at a Winter Games on snow rather than ice, where 22 medals had been won before Sochi in events such as figure skating, curling, skeleton, bobsleigh and, in the more distant past, ice hockey.

The Slopestyle discipline was only accepted into the Sochi Olympic programme in 2012, at a time when Jenny was considering her future in the sport.