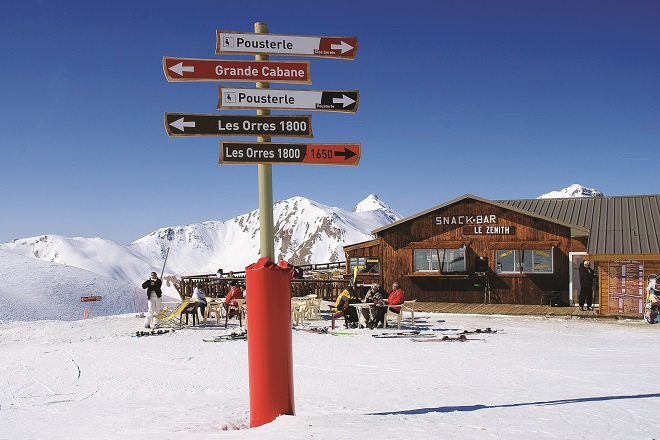 Nestled high in the Southern Alps and all but hidden from view above the vast Lac de Serre-Poncon, lies hidden gem Les Orres, southern enough to guarantee sunny weather, and high enough to ensure plenty of snow.

Les Orres’ origins as a purpose-built high-altitude ski area are reflected in the high-rise architecture of the original 1650 village. In recent years a more traditionally-styled village, 1800 Bois-Méan, has been formed above the old one, offering more spacious accommodation and ski-in/ski-out convenience.

From Les Orres 1650 you can take a couple of chairlifts up to 2430 then ski the central red and blue pistes, dropping down to Pramouton and then Champ Lacas, which at 1550m are as low as it gets. Novices and intermediates will enjoy gentle lower, mid-mountain areas and the delightful sheltered woodland trails, including some little-used cut-throughs. Higher up the mountain things become significantly steeper, with the topmost descents accessible only by drag-lifts. Once up there you have stunning panoramic views and a choice of long descents back through the tree-line. Two red runs, Genépi followed by Grand Cabane, reward with an epic descent which throws in just about everything along the way.
While the ski area may not appear that big, there’s plenty of varied terrain in Les Orres, including some great off-piste, for all levels and interests, particularly suiting families and mixed ability groups. For such a small resort it delivers the goods.