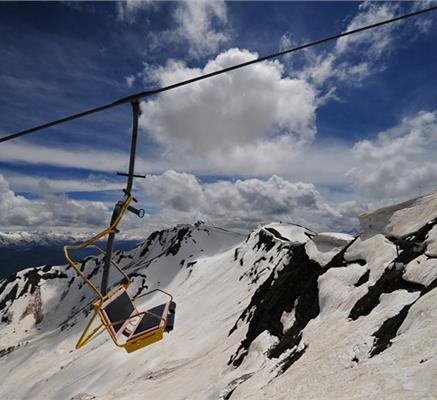 Sochi takes shape and Putins the style. Sochi is the Next Big Thing, yet you can’t ski there. The host of the 2014 Winter Olympics in Russia is actually a resort city on the Black Sea, where Vladimir Putin has a holiday home. The skiing is inland at four areas, all within a snowball’s throw of each other – Rosa Khutor, Gazprom, Mountain Carousel and Alpika. From Sochi (and its airport) it’s about an hour by road but will be less than 30 minutes when the railway, scything up the valley on stilts, is complete. And, it will be complete. It’s Putin’s baby (Gazprom, romantically named after the energy company that owns it, is where he has another holiday home) and there will be no hiccups. We visited in early 2012 and not only is it the only ski resort where we’ve seen building work in winter it’s the only one where we’ve seen it at midnight. On a Sunday. Bleary-eyed, mud-stained workers are at it 24 hours a day as something like Whistler, but bigger, rises. 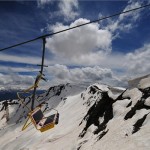 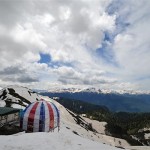 Mountain Carousel is the heart of things. Its Whistler-like village (Gorky-Gorod) is in two sections, down by the river and at the 960m gondola summit. The skiing is similar to Rosa Khutor, long, winding, often steep runs teamed with plentiful off-piste. Alpika has a string of lifts heading up to the 2,228m summit, and an incredible 1,700m vertical drop straight back down, plus lots of open slope off-piste. Likely to be closed this season for refurbishment.

The four resorts will end up being linked by lift, but for now there are on separate lift passes and connected by taxi. And, this being Russia, areas and hotels are prone to sudden closures when dignitaries visit. Locally the British Banya spa, run by a Brit, with its cauldron hot tub over a log fire and its oak twig thrashings is a great day out. The resort name is Sochi, although locally the four areas are known by the nearby town name, Krasnaya Polyana.

The resorts will be a breath-taking, bling-heavy mix of international shops and restaurants while the slopes are already quite superb, with new, fast lifts (and security scanners). This isn’t eastern European skiing as we know it (low peaks, easy runs); the feel is more western Canada, steep mountainsides covered in pine forest and with lots of off-piste in deep powder.

Rosa Khutor looks like a Disney ski resort (or Tremblant), colourful, buildings on either side of the River Mzymta (with US city-style Park Inn and Tulip Inn hotels). The riverside gondola accesses the skiing (the biggest area, currently 38km but rising to 80km) and two more connect with the 2,320m summit and its 1,400m vertical drop. In between twisting, turning runs are fields of off-piste while a ridge traverse accesses Ober Khutor, a powdery paradise all the way down.

Gazprom is a big car park and modern base lodge, but on the Psekhako plateau it’s pure chocolate box – the glitzy Grand Hotel Polyana, wooden chalet restaurant and umbrella bars. Runs here are more conventional, less steep but still with off-piste through the trees.