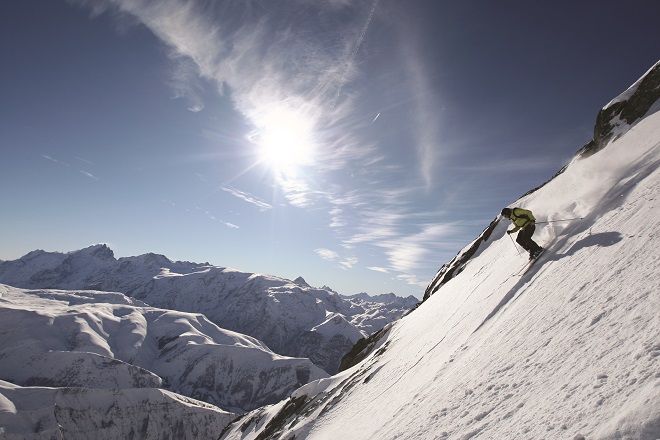 Alpe d’Huez is one of the dominant French resorts, its reputation for both snow and sunshine matched by an extensive lift system and impressive range of slopes.

It is part of the Grandes Rousses, a high altitude expansive domain containing large areas of skiable glacier.
The resort has the longest black run in the Alps, the world famous Sarenne, which, like much of Alpe d’Huez, is best suited to adventurous intermediates. It starts at 3330 metres and has stunning views of the Ecrins Mountains. The Tunnel run, with its daunting mogul field, is also recommended to those who like a challenge.
The resort has huge off-piste potential but not much woodland to explore. Beginners are catered for with a world-class array of green runs close to the village. Many complain, however, that the lower runs are too icy in the morning and slushy later on. They are also congested at times. The higher slopes do not suffer from these problems but are often closed in bad weather or bitterly cold. Piste grading is also an issue. Many runs are more difficult than is suggested by their assigned colour which can be frustrating for mixed ability groups.

The resort itself is uninteresting in design with stone buildings and wooden chalets muddled over a sprawling area. Some prefer to stay in the quieter, more charming satellite villages of Vaujany, Villard Reculas, Oz en Oisans and Auris en Oisans.There is a general buzz about the nightlife and daytime activity. Many comment that it is one of the friendliest French resorts that they have been to. Non-skiers have several shops, a good sports centre and notably varied activities to keep them entertained. For those seeking a little bit of everything Alpe d’Huez covers most bases.