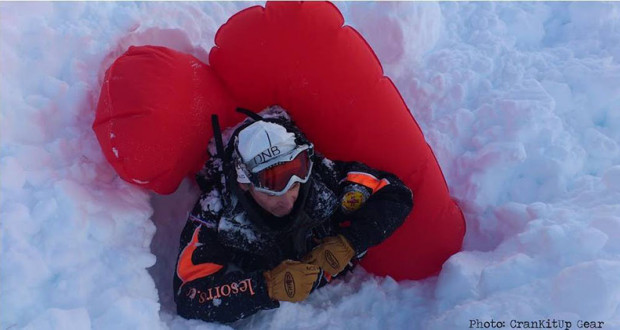 Channel 4 Sports Ed Keme Nzerem has a cautionary tale for all serious off-pisters flying overseas with their avalanche safety bags, after suffering a serious delay in India en route to write a feature for Good Ski Guide.

After flying London to Delhi he checked in to a connecting flight to Srinagar but was summoned by security tannoy to the checkpoint to open his bag containing a standard issue cylinder for an ABS avalanche safety bag. He had obtained prior written confirmation from Jet Airways that this equipment was cleared for transport and he had also obtained visual and verbal clearance from the check in staff.

Keme and his bag was duly cleared, but when he got back to the Srinagar gate he had missed his flight. As had his travelling companion Gary Thompson, and both had their luggage removed.

Then they had to pay for new flights and as the next ones available were next day and had to spend an expensive night in a Delhi hotel, and missed a valuable day’s skiing at Gulmarg in the Himalayas. Keme sent a stinker of a letter to Jet Airways and had his flight money returned, but this is a heads-up to all who travel with avalanche airbags:

Such an incident is unlikely to occur in North America, where airlines are familiar with airbags, although the cylinder must be discharged and you can get it re-filled at ski shop in the resort.  India’s ski business is a fledgling one at the moment, although it has some of the highest ski peaks on the planet.