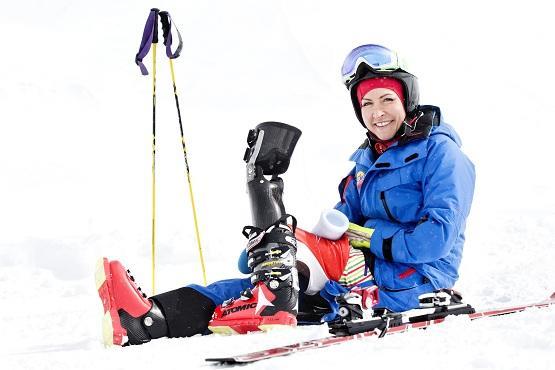 Brilliant British ski-racer Heather Mills is moving closer to winning a medal in the 2014 Winter Paralympic games in Sochi, Russia – with the help of a new carbon fibre prosthetic leg which will improve her control and focus.

Nicknamed “H-bomb” by her coaches, Heather is utterly fearless, and totally committed to her sport.

During training in Austria, she spoke, exclusively, to GSG’s Sally Ann Voak about her hopes for a medal, her arduous, and often painful, training schedule, and the “bionic” leg which she hopes will help her achieve her dream.

“I’m 45 and will only have one shot at this next year, so I must focus,” she says, “I train with John Clarke of Eurosport skiing. I have learned more with them in 4 months than in 20 years. Now I have my new leg, I’m improving all the time.”

Courageous Heather had her left leg amputated below the knee following a road accident in 1993. Having learned to ski on holiday at the age of 21, she returned to the sport a few years ago, still a virtual novice. Despite her disability, she found she loved it and improved rapidly. After being spotted tearing down a slope at 62 mph on slalom skis she was encouraged to try for ski race training. A trial with the British disabled ski team followed in December 2010, and Heather joined the development squad last year.

She has endured numerous injuries since learning to race, including a broken ankle, fractured pelvis and ribs. “Most occurred because of problems with my old ski leg and some because I learned to race in such a short time, taking huge risks while just a beginner,” she says.

As a leg amputee, Heather could be eligible to compete in the Games on a monoski – but medical experts advised against it: “It’s easier to ski with one leg and two “outriggers” (poles fitted with mini skis),” she says. “There’s no stump pain while skiing, no prosthetic to contend with and you can achieve a nice straight line in the slalom.”

“It was not an option for me as I have 2 metal plates in my pelvis and intense 5 hr daily training sessions put too much pressure on it. I smashed it in the motorcycle accident. It was plated, then one plate broke on the birth of my daughter, Beatrice in 2003. I trained my core muscles like crazy to strengthen it but it is still vulnerable.”

Heather visited many clinics in the hope of finding a leg that fitted correctly – while continuing to train and compete: “I was constantly crashing because I have a very short stump and suffered skin and tissue damage causing severe pain and constant blistering. I wasted pretty much my first 2 seasons of training, recovering from accidents.

“The nearest thing to describe the feeling to a two-legged skier is this: try skiing with both boots completely open, 4 sizes too big, speeding through the gates at 60 mph plus. The lack of response on a fast turn, plus the pain, makes it almost impossible to achieve the proper balance day after day without crashing. You get used to tumbles.”

Despite her pain and problems, last year this incredible woman managed to claim the Super G Austria Cup title in the speed race and four golds at the US Adaptive Alpine Skiing National Championships in Aspen, Colorado.

The new leg has been made at the London Prosthetic Centre in Kingston-upon-Thames by Abdo Haidar, Consultant Prosthetist and his team. After watching Heather in action at the Hemel Hempstead ski slopes, Abdo worked on a design which would provide maximum control close to the ground.

He says. “We designed and fitted the socket in such a way that considerably reduces movement and thereby enhances control and focus. Of course, the key factor is the incredible drive and courage that Heather possesses.” It took a year of hard work, and countless fittings to get it right, but Heather believes her new leg will increase her chances of success.

“Abdo’s comfortable, tight fitting socket design has enabled me to progress as a racer with a feeling of safety, which obviously gives me more confidence on those turns,” she says. This amazing lady adds, almost casually: “I don’t wear it off-piste because it is specifically made for skiing. I have to screw it in before I ski off, which cuts the blood circulation for about 2 minutes.

Then, on the chairlift, I release the screw with a button to get the circulation back. If my stump wasn’t so tiny with so much soft tissue and no fibula for balance, I would probably not need to screw it in so much.” With that kind of determination and sheer guts, our Heather deserves to do well next year. The team at GSG wish her all the very best. Go for it, girl!