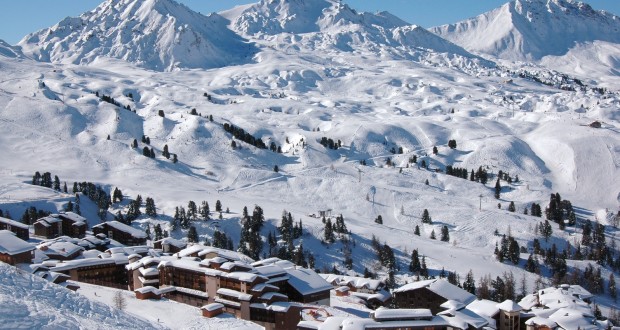 La Plagne is one of the world’s biggest ski areas, boasting 225km of runs from soaring glaciers to comfy, tree-lined village slopes, massive amounts of cruising and buttock-clenching off-piste.

That’s before you add the Les Arcs link. La Plagne has skiing as high as 3,250m on the Bellecôte glacier down to 1,170m in Longefoy village.
Ten villages make up La Plagne, all linked by lift and piste. Six are purpose-built, including Plagne Centre, which has previously beaten even Les Arcs and Flaine in the ugly stakes, but which is in the middle of a big makeover, with prettier options such as Plagne Bellecôte. This is a place that offers unrivalled ski-in ski- out convenience, whether the posh chalets of Plagne 1800 or the apartments (and re-vamped chalet hotel of Mark Warner) at Plagne Centre. The villages of Mont-chavin, Les Coches, Montalbert and Champagny en Vanoise lie in the surrounding valleys and offer an excellent compromise between easy access to snowsure slopes and traditional charm.

La Plagne is cruising country par excellence, with 86 per cent of the pistes graded blue or red, yet this is far from a boring collection of slopes. Intermediates will have the time of their lives, and you can go a week without skiing the same run twice, let alone those in Les Arcs.
This is an excellent resort to learn to ski, with easy nursery slopes on the doorstep of each village. The advanced have some good, long blacks to test, including the Emile Allais, plus two steeps from the top of Bellecôte and from Chiaupe down to Les Bauches. It is, however, the considerable off-piste that will lure the expert. The itineraries off the back of Bellecôte are some of the best in the Alps. Boarders will find very good terrain everywhere as well as terrain parks with half-pipes.

View La Plagne on the Web

La Plagne has made big lift improvements in past years, including six-seaters to speed up access from Montchavin to L’Arpette and a new eight-man chair from Plagne-Bellecôte.
Après ski is limited to bars and discos but gets fairly lively in the season. There are some good restaurants – even within the depressing confines of Plagne Centre’s subterranean shopping mall.

Previous: Why we love to ski…
Next: Sochi Bound