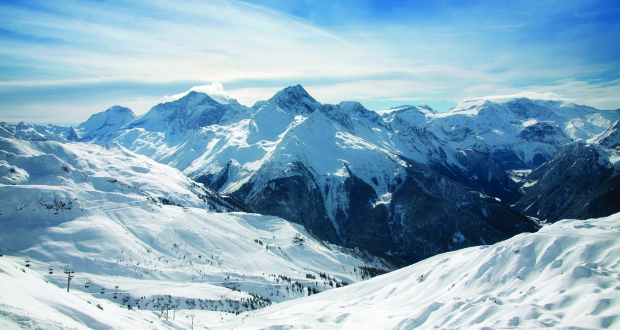 Les Arcs and La Plagne are the main resorts that make up the incredible Paradiski network with terrain to satisfy even the most demanding of skiers.

The Vanoise Express cable car links Peisey Nancroix (in Les Arcs) to Montchavin (in La Plagne) creating a total area of 425km.
The local area has 200km of fantastic slopes- wide motorway blues that go on forever, steep and deep black runs, as well as glorious tree-lined runs down to ancient farming villages.
Most of the skiing is best for beginners and intermediates, though there is also plenty to keep advanced skiers happy, particularly the black runs down to Aiguille Rouge and the great long black run all the way down to the summit of Le Pré in the valley- a massive 2,225m of vertical drop.  Skiing is mainly above the tree line though you can glide all the way down to the pretty valley villages such as Villaroger where meals can be half the prices of Les Arcs’ mountain eateries.

The village of Arc 1600, Arc 1800 and Arc 2000 are archetypal French purpose-built resorts, with unrivalled ski-in, ski-out making up for the architecture.
The newer Arc 1950 has all mod cons including swimming pool, sauna and gym and is more pleasant than the others.
The tiny village of Peisey is a great place to stay and remains refreshingly unspoilt despite being at the heart of one of the world’s great ski areas. Après-ski- there are a couple of nightclubs in Arc 1800 and new last season, a small nightclub in Arc 1950.

View Les Arcs on the Web