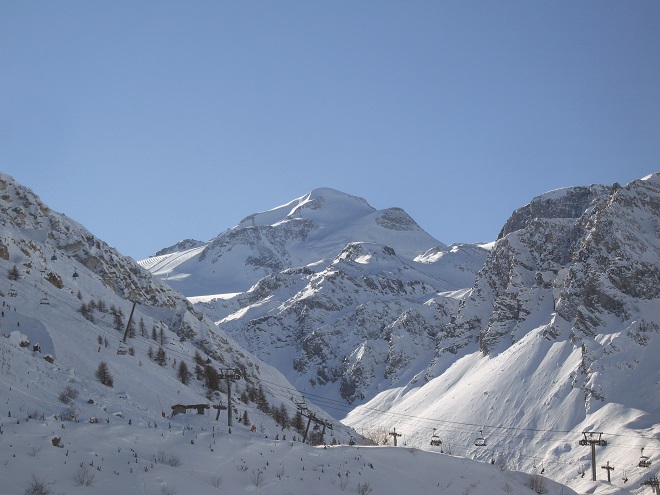 Tignes is a no frills budget version of neighbouring rival Val d’Isère that still packs a big punch. Fly to Chambéry airport if you can (two and a half hours drive) but Geneva and Lyon are only half an hour further.

Both resorts make up the 300km Espace Killy, one of France’s biggest, highest and best ski areas, with some of the finest intermediate and advanced runs in the world, including glacier skiing on La Grande Motte.
Beginners will enjoy nursery slopes in Tignes-le-Lac and Le Lavachet, though easy runs are sometimes hard to reach as they’re not on the doorstep. Good skiers to love popular runs back to town, including the famous couloirs. There is good lift served off-piste skiing; the Lognan being perfect for off-piste beginners. Both resorts are also good for boarders, but Tignes, with fewer drag lifts, is the riders’ choice. For peace and quiet why not try the picturesque popular lunch spot Les-Brevières, lift linked to the main resort, and Tignes’ other tranquil tree-lined village Les Boisses.

The resort itself is purpose-built and split between Tignes La Lac (with its pretty market, lakeside walks and stylish new pool and spa centre) and the bigger, less interesting Tignes Val Claret which stand together in a vast snowy bowl. While the buildings aren’t pretty, the mountains certainly are! And unlike Val d’Isère, where you need to bus between the ski areas, the lift convenience at Tignes is much more user-friendly and much easier to ski back to at night. While Val is full of stunningly expensive bars and restaurants Tignes has less than half the number and they are less pricey much less noisy. Don’t be fooled. Out of the two Tignes is more of a real skier resort.