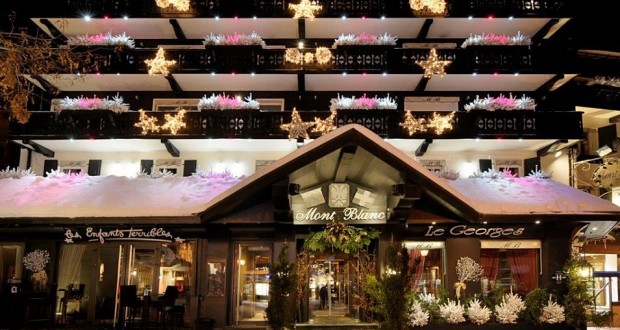 Big snows are here at last – with all the Alps covered

The French Alps was hit by an amazing week of big snows – so great they blocked main roads, kept skiers off the higher slopes and sparked avalanche warnings everywhere.

I had gone the glitzy resort of Megeve to check out the Decathlon company’s brilliant new HQ and superstore at nearby Passy and test their super new gear.
First test day saw us having to cope with up to three feet on areas unswept by piste bashers – and even those slopes just treated quickly began to grow again. Hardly ideal for testing piste skis – but great for Decathlon’s all-mountain range.
Really massive flakes continued, forcing an early lunch stop, and when we hit the slopes again the deluge was just as fierce, and I was very glad to have an excellent guide in Decathlon’s lovely Pauline, who fortunately knew the slopes at Mont d’Arbois intimately or had X-ray vision.
Test over we were taxied back to Passy to see the new superstore HQ, and when we tried to get back to our hotel in Megeve we had to use back-roads as the main highways were littered with crashed vehicles and emergency teams in action – a real snow Armageddon.
We were advised to check out of our mountain-top hotel and repair to the large town of Sallanches, where a new Ibis hotel put us up at short notice, though they were rapidly filling up with guests visiting injured ski friends and family in the town’s major hospital. The snow was still dumping at 8pm. and we could not even see properly enough to get to a nearby restaurant, so grabbed sandwiches from a large supermarket next door, which was busy with shoppers panic-buying essentials.

Next morning we awoke to a silent town again eerily snow deluged and after brushing a foot of snow off the car roof I headed back to Passy, slipping and skidding all the way. No testing this day – and I had lots of time to check-out what must be the ultimate in ski superstores, and here’s a first – Decathlon’s international headquarters are based here and dedicated staff are on hand, watching all the time to help shoppers, answering questions and generally being helpful. The company has an old-time British business policy – the customer is always right and any shopper unhappy with a product is either given a refund or new product. Not that there was much wrong with the gear on sale – their latest range of boot, skis and sports gear is as good as it gets – and we will be reporting fully later.
Fortunately I had had the sense to book a 4 x 4 Audi with snow tyres (and chains) from the UK’s best car rental team, CarRentals and I was the last car allowed by police to attempt the 10km uphill trip from Sallanches to Megeve before they closed it for two days – drifting snow and very many vehicles crashed or abandoned. It was most eerie to be the only vehicle driving in this great white wilderness, not even being able to see road marking or shited-out signposts – and it was with great relief that I finally got to the centre of Megeve and checked into the very fine 4-star Hotel Mont Blanc and I only got the last room because of a no-show, because of snow.
Even in this fine hotel the snows had struck with a vengeance – and staff were slaving at all hours simply to clear the streets – and my balcony outside was not reachable because a 6-foot drift had settled (see photo). After a fine dinner in the hotel’s steak house I happily retired and woke next day to – would you believe – SUNSHINE. The great storm had stopped? No simply abated and Marcel, the hotel’s ancient and trusted bag man advised me to get out of the area while I could; so I left a brilliant hotel, and a perfect-snow resort for my next stop in Chamonix – about 25 km away.
And the trip took more than 90 minutes because the main roads were still blocked and I had to route through St Gervais to reach the A40 Autoroute to Cham for my next stop in the curiously-named Amazon Creek chalet complex at Les Bossons right at the foot of Mont Blanc. And here is where the trip got really good…