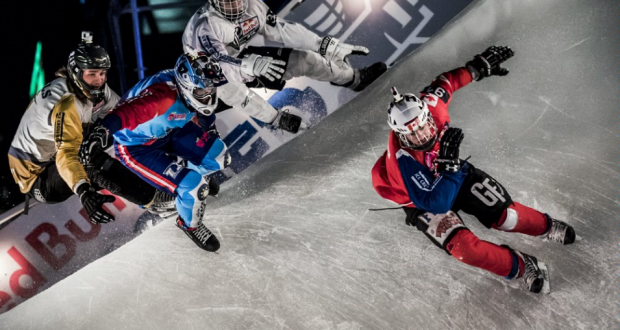 Stand by to crash as world’s fastest sport on skates returns.

The fastest sport on skates – Red Bull’s Crashed Ice series – is returning to Québec City in Canada this weekend. And Scottish skiing ace Alain Baxter continues his return to winter sports, this time accompanied by pro freestyle street skater Scott Quinn. Scott, also from Scotland, is all set to swap the skate park for the ice track when the electrifying clink of metal to ice heralds the Red Bull Crashed Ice season premiere.

The Ice Cross Downhill World Championship kicks off its 16th season in Québec City on November 27-28 and finishes at Saint Paul, Minnesota , on February, 26-27. Before then the downhill racing on ice skates will move to Europe with the Red Bull Crashed Ice races in Germany (January 8-9) and Jyväskylä-Laajis, Finland (January 29-30). The most spectacular man-made course in sport will fill the icy streets of Quebec for the season opener. Ice Cross Downhill is fast and physical – and easy to follow as four riders at a time race down the icy track to reach the finish line.

Aviemore local Alain Baxter will be hoping to advance to the latter stages of the competition, having competed in Belfast and in Edmonton earlier this year where he achieved the ‘fastest rookie’ award. Alain said: ‘I’d never felt the sort of adrenaline Crashed Ice gives since retiring from skiing.”

Meanwhile Crashed Ice athlete Scott Quinn (‘Quinny’, aged 28), from Glasgow, has been a pro freestyle skater his whole life. His background in freestyle skating. Quinny and Alain are Britain’s sole representatives in this toughest of challenges and watch this space for their wham bang progress.

The growing popularity of Ice Cross Downhill has been fuelled in part by the tremendous improvements in skill and experience among the top racers, Papillon added.

Reflecting the tremendous level of competition and steep improvement from year to year, there have been six different world champions in the last six years and five will be in the field this season trying to dethrone Croxall as well as a hard-charging pack of fleet-footed challengers eager to grab the limelight in fast yet grueling sport. Marco Dallago of Austria (2014 world champion), Derek Wedge of Switzerland (2013), Kyle Croxall of Canada (2012) and Martin Niefnecker of Germany (2010). American Cameron Naasz, who was second overall in 2015 and third in 2014, will be looking to finally win the title this year as well as Dean and Dylan Moriarity of Canada, who finished third and fifth overall last season.

What is Red Bull Crashed Ice?

Ice Cross Downhill is the fastest sport on skates where athletes hurtle down a massive ice track filled with drops, hairpin turns, and gaps at speeds of more than 50km/h. World Championship points are up for grabs at each of the stops, and the competitor who skates through the season with the most points accumulated after the races will be crowned the 2015-2016 Ice Cross Downhill World Champion.

Red Bull Crashed Ice sets the stage for unique Ice Cross Downhill action where it’s physical, it’s fast and the sportive format is easy to follow: four riders go down the track and the fastest two advance to the next round. Thousands of cheering fans are close to the action and witness the unique atmosphere of the most attractive and most visited/participated global winter sport. Red Bull Crashed Ice events are taking place at unusual locations with stunning backdrops.

The new Women’s World Championship will make its eagerly awaited debut this season, and includes races in all Red Bull Crashed Ice and Riders Cup races. In the past, there were individual women’s races at some locations, such as in Canada.