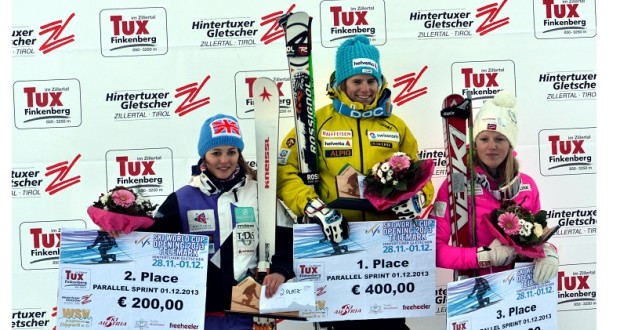 British Telemark Champion Jasmin Taylor, became the first ever Briton to get on the podium by coming in second on the International Ski Federation World Cup in Hintertux, just behind world champ Amélie Reymond, from Switzerland.

Jasmin’s season was cut short by a knee injury in March when she crashed out during training for the Junior World Championships, but she made a brave comeback after following a strict strength and conditioning programme.

Jasmin commented: “Since I returned from France, back in April, I’ve been working harder than ever to regain my strength so I can get back in the gym as soon as possible. I was absolutely devastated I wasn’t able to go to Norway for the Junior World Champs.”.

Jasmin will also continue to inspire the next generation of British athletes through her work as an ambassador to winter sports charity Snow-Camp and regional organisation Suffolk Sport. Throughout the summer Jasmin will give a series of informal talks to schools in the Suffolk area, aimed at raising the profile of snowsports, and promoting the benefits of exercise and healthy eating.

Next winter the Telemark World Cup will run November through April to the World in Colorado.

Telemark racing is very similar to conventional downhill skiing and involves going through red and blue flagged gates. But telemarkers have the extra challenge of negotiating a large jump half way down the slalom course as well as a cross-country skating section to really test the competitor’s endurance.