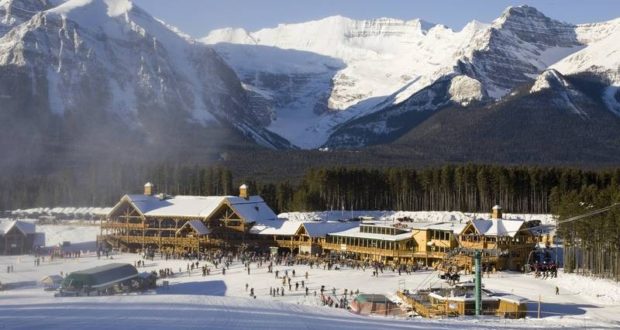 The world’s good and great have all visited Lake Louise

Ski life began for Ski Lake Louise owner  Charles B. Locke, then a successful investment banker, when he heard the ski hill at Lake Louise was for sale, and bought it from British-born Sir Norman Watson, son of the famous Scot who invented margarine.

That was in 1981, and it was a hard slog from day 1, because they launched amid a banking crisis, when loan interest soared to 20% in Europe and an eye-watering 22% in Canada. But entrepreneur Charlie dug in and sweated things out – and “I only made one mistake, when I also bought Fortress Mountain (west of Calgary) instead of snapping up Whistler’s twin mountain of Blackcomb from Aspen. That would have sorted out the opposition once and for all,” he quipped as a mighty Whistler tourist bus full of smiling, snow-hunting Japanese skiers rolled into the Louise parking area to drool over in the still snow-laden home runs full of not just Albertan and Canadian enthusiasts, but European, Asian and Antipodean enthusiasts.

But when pressed he lets drop that Bobbie Kennedy and his son were regulars at the resort’s celebrity events, and particlarly remembers A-listers such as Henry Fonda and more-famous fittie daughter Jane, and Alec Baldwin, who discovered and became a regular Lake Louiser when shooting a thriller in the wilds near Lake Louise. “Oh and President Trump’s first wife Martha was also a guest, and a very able skier,” added Louise. “And on Presidents, we’ve hosted many, including Pierre Trudeau, his President son and Jean Cieleon, and Spain’s King Juan Carlos (fine skier) and many foreign dignitaries.” One of the most enigmatic was  Austrian lift-builder Oscar Doppelmayer,  who Charlie and I have both met and enjoyed his jokes  - and schnapps.

Yet all this fame and fortune has hardly touched Charlie, who remains a happy and jolly chap who is incredibly modest. I remember asking him once why he always was so happy and all smiles as he toured his resort checking that all was working smoothly, and his response had me smiling too.

“You see John, I have never really had a job. What I do is a pleasure and it is so fulfilling to see all my customers, and employees, smiling”.

While skiing Louise in early May this year, I did too much and took a fall on the steepest section of the home run, caught an edge and after being momentarily airborne, smacked down heavily on hard-pack, so recovered by skiing gingerly down to Whitehorn Lodge and regained my old self, but got patrolman Karl Roberts to lead me down to the medic station for a check-over.  I offered Karl, a really dedicated professional, a tip, and he very politely responded – “No Sir, that’s exactly what I get paid to do”.

The Locke’s touch is clearly infectious. In my six decades of touring the world’s ski resorts I have never met such a happy crew as the team at Ski Louise. There are incredible, old-world, good manners everywhere. Something you don’t see much in Europe, particularly non-polite French ski resorts…

The resort king sometimes forgets he also owns profitable oil wells on his ranch atop hills overlooking Calgary - and also pumps in Montana and Texas in the American West. To stop him getting bored, he also has huge herds of beef-producing cattle. All come under his company called Locke Stock and Barrell, “so named because Locke’s my name, Stock’s my game (being a cattleman) and Barrell refers to my oil wells.”

I recall once asking Charlie if it was true that I had read that he was now a multi-millionaire, and how it felt and he responded: “Well John, it feels no different today to yesterday. I can only have one steak dinner a day.”

Charlie is always keen to mention that he has not reached these great business heights on his own as the power behind the throne is his long-hours-sufferering, and loving and fiercely-loyal snowboarder wife Louise. And latterly, ably assisted by their grown-up daughters Kim and Robin, who are vice-presidents. One is VP strategy and the other VP corporate affairs. The girls will ultimately run the companies when Charlie and Louise hang up their boots.