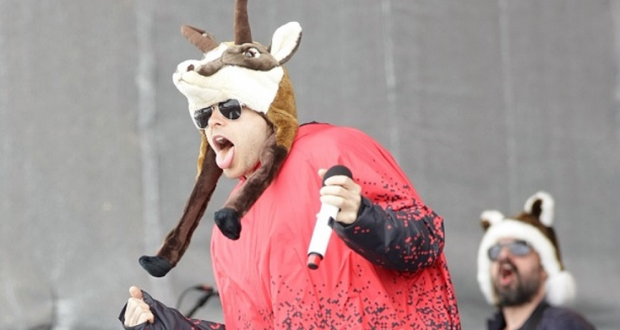 The Tyrolean ski resort of Ischgl ended another good season with its closing concert, when US band Thirty Seconds To Mars thrilled 13,000 skiers, boarders and fans at the gig opened by James Blunt.
Thirty Seconds’ lead singer – and Oscar winning actor – Jared Leto wore a goat spirit hood, representing his birth sign of Capricorn, and a balloon-like grey and red splattered jacket for the concert. He told the crowd: “This is such a gorgeous and beautiful place; we have had an amazing time here.”
Next season’s opening concert on November 28 is headed up by British band Supertramp – whose hits include Give A Little Bit and Dreamer.
Supertramp will take to the stage in Ischgl village itself, at the beginning of their Supertramp Forever Tour, which marks their first live performances in more than five years.
They join Ischgl’s Hall Of Fame of international performers, including fellow Brits Robbie Williams, Elton John, Rod Stewart, Ronan Keating, Sting, Leona Lewis, Amy Macdonald and Deep Purple.
www.ischgl.com