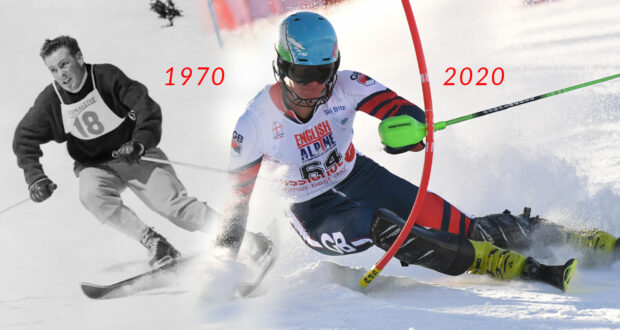 A 40 Year History with The Good Ski Guide….

Good Ski Guide launched in 1971 after John Hill's trip to Austrian resort of Ehrwald with Blue Sky Holidays tour firm – It cost £31 for flights, transfer, full board and room with bath, and daily ski lesssons (instructors being shy ex-Nazis, who shunned being in photo shoots) Hill’s first European trip to Alps.

Editions till 1974 were published as at of Hill’s Ski Diary and re-launched in 1986 along with tour operator Neilson’s first brochure. Print run 320,000 -  record for a British sports magazine

GSG was published by Hill and Neilsons until Hill had enough money to go it alone – and did it with a bang as he was well connected, being in the management of The Sun, which had become Britain’s biggest  selling newspaper.

Around this time a horde of rival magazines sprung up, but Hill, a Murdoch man, worried not and carried on with huge distributions of a free magazine, given out free at Travel agencies and later in Thomas Cook branches.

When it became a household name in 1984 Hill sold his magazines in WH Smiths and all main street agencies, and did very well.

1974 Good Ski Guide re-launched as the UK’s first commercial ski magazine by John Hill, with News International (Rupert Murdoch) money and staff. Instant success, thanks to News Int backing. At this time the UK ski market was very small, with market leader being Erna Lowe, carrying around 8,000 skiers, mainly to Austria. Good Ski’s mission statement was to grow the market and become Britain and Europe’s biggest and best ski guide.

1980 Thomson, seeing the success of Neilson, called in Hill to help them launch its first ski product in an ever-expanding ski market.

1985 GSG teams up with the Daily Mail Ski Show and helps achieve a record audience of 120,000 – still a record and four times today’s audience.

1986 GSG becomes the best-selling sports magazine on the newsstands – outselling even football titles – ABC of 67,381.

1987/88 Daily Mail group, seeing success of Good Ski, launch their own ski magazine and editor Sir David English threatened to “kill off” all other ski mags, including GSG. At the end of that year GSG was still market leader and industry bible Campaign reported – “Good Ski Guide is by far the best ski magazine in the UK.”

1989 Good Ski launches Canada on the UK and European market. Lake Louise owner Charlie Locke signed a major deal with John Hill to promote Louise and attract British tour operators. Inside 3 years the number of UK visitors to Alberta grew from zero to 15,000 and is now 40,000.

1990 Neilson boss Warren Sandral buys 500,000 copies of Good Ski Guide to distribute to travel agents as a promotion for skiing, giving GSG an ABC of 464,000 copies – still a UK record for a sports magazine.

1991 GSG launches its own Visa card for readers, first on market and profitable from Year 1.

1995 www.goodskiguide.com launched as Britian’s first ski web site – and first sports magazine with a site. At that time the web was called the Information Highway.www.goodskiguide.com revamped 8 times since launch, and is being rebuilt again in 2014.

1995 GSG gets the UK motor industry involved in skiing in a major way- attracting ad and marketing campaigns from Audi, BMW, Nissan and Toyota.

1999 GSG and Harrods launch the Harrods Ski Week, hugely successful, and would have continued but for the tragic death of Princess Diana.

2020-06-19
bp-admin
Previous: Quiet with der bottom please
Next: We are skiing already. Last London slope is taking off